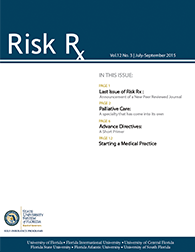 Telemedicine and Its Liability Implications

While the concept of telemedicine has emerged well over the last decade, its application has only slowly been interpreted and analyzed by medical boards, national associations and courts across the nation. However, the sluggish evolution of interpreting law has certainly not precluded physician disciplinary action  and  frustration within the medical community regarding the use of telemedicine.   The benefits of telemedicine  include greater patient access and reduced in-office patient load. The concept has been appreciated for its applicability to address issues from radiologic interpretation and pathologic interpretation to patients’ minor infections, rashes and colds, after the patient has already seen a physician and established a physician-patient relationship. This article will focus on the issues for a Florida provider concerning telemedicine.   Is Telemedicine defined in Florida?   The Florida Board of Medicine (the “Board”) has addressed telemedicine in the past but not as much as one would think given the size and patient population of Florida. The only rule published by the Board that addresses telemedicine is Rule 64B8-9.014, F.A.C. The Rule states that telemedicine includes, but is not limited to, prescribing  legend  drugs  to  a  patient  through  the internet, telephone and/or facsimile. The rule is geared specifically to the Standards for Telemedicine Prescribing Practice and does not address one of the more common uses of telemedicine, and that is teleradiology.   The authors note that the Board has been supportive of the concept of telemedicine but there is not particularly much written guidance or disciplinary action guidance available for providers. The U.S. Government supports the use of telemedicine, which has been adopted and is in use by the Veteran’s Administration health care facilities and through the Indian Health Services Administration. Moreover, Medicare reimburses for the use of telemedicine, the largest source of which is through teleradiology.   Prescribing Via the Internet   In 2003, the Board promulgated the Standards for Telemedicine Prescribing Practice, Rule 64B8-9.014, F.A.C. This Rule was written to address the significantly growing issue concerning the prescribing of medications over the internet. In summary, the Rule provides that prescribing medications based solely on an electronic medical questionnaire constitutes the failure to practice medicine within the standard of care, as well as prescribing legend drugs other than in the course of a physician’s professional practice. See 64B89.014 (1), F.A.C. The Board requires through the Rule, that physicians and physician assistants shall not provide treatment recommendations, including issuing a prescription, via electronic or other means, unless the following elements have been met:

1. A documented patient evaluation, including history and physical examination to establish the diagnosis for which any legend drug is prescribed.

3. Maintenance of contemporaneous medical records meeting the requirements of Rule 64B8-9.003, F.A.C.